How come EU representatives did not make representations to the PM when 21/4 happened but are now meeting the PM claiming that Muslims are targeted? On what basis are they substantiating these comments? Is it following biased media and NGOs run by entities that the Western Govts fund? Is there a bigger motive to all this? When the country has united against extremism that caused 21/4 and to which even many Muslims are now openly showing displeasure is the entry of these global troublemakers pretending to be global police trying to pressurize government not to completely curb the extremisms as these entities need extremism around for them to interfere and push their agendas through? This is what we all need to now wonder.

Easter Sunday massacre was not only well planned it was well executed despite the fact that the entire government was aware of the attacks since 8 April 2019. While they either strengthened their security or did not attend church, none of them thought fit to even call the Cardinal or the 3 hotels that were named to be targets. Indian intelligence had been so precise and the names and numbers of the killers had been divulged to their counterparts in Sri Lanka. We really are not concerned to ask why they took no action because listening to the public hearings we can only cry at the level of incompetency, lack of concern or interest in other people’s lives those in power have. Watching them laugh at press conference and then to hear that after 150 people were killed in Mali resulting in the entire Mali Government resigning concludes that even Mali Government has more integrity than the Sri Lankan Government. Sri Lanka’s Government forces others to resign to save their face. The Mali Government stands on a higher moral ground than Sri Lanka’s Government.

The country and world stood in shock when we heard of the 1st attack, then another attack and then several more attacks and it was nothing we could connect to, even after weathering 30 years of LTTE terror because even LTTE had never carried out 8 simultaneous attacks on the same day in different places as these suicide bombers had.

The other shock came to discover that these suicide bombers were all devout Muslims, most were very rich, from affluent business families, 3 of the suicide bombers were related – 2 brothers and a wife. These were all shocks to every citizen of Sri Lanka even though they had suffered 30 years of terror. It is not that these terror cells were not known. They had been under the intelligence radar since 2011. There is little point now in asking why or who closed the 2 units tasked to monitor these Islamic terror cells in 2016 but the immediate arrests showed that the authorities knew where they were operating.

Then came the next shock as island-wide discoveries of swords, ammunition, detonators, sophisticated communication systems, jihadi videos etc were found in mosques, Muslim homes & Muslim shops. Can everyone stop for a minute and imagine the fear that the people began to next experience post-21/4 with these discoveries. Was it not why the Government was quick to ban media relaying these discoveries and probably stop the army & police raids.

Then came another shock that Muslim ministers were linked to these suicide bombers & their families and had even been working in the ministries. Another fact not given due attention was Zaharan’s brother who was experimenting with the bombs had got injured before 21/4 and lost an eye and had been taken to Colombo and treated by a Muslim doctor for two months before Easter Sunday attack. Why has this doctor not been taken into custody or in the least questioned? Then came the news of mass sterilization by a Muslim doctors and whatever stories being attempted to cover the incident over 800 women have lodged complaints.

Then we saw a quest to regain popularity between two Buddhist theros interpreted in various ways but at least the death fast resulted in the resignation of the 2 Governors but also puzzled all as to why all Muslim Ministers should resign to show solidarity with 3 Muslims allegedly linked to the 21/4 suicide bombers. Puzzling matters further was that while these Muslim ministers resigned claiming to show solidarity with the 3 Muslims linked to 21/4 the President appoints a Muslim Governor who accepts the position happily! Ironically the leader of the main Muslim party is now sitting on the committee probing the 21/4 !

The other factor obviously justifying foreign interference is a synchronized attack 3 weeks after 21/4 which just didn’t make sense at all and clearly showed that it was an organized attack simply to divert people’s attention from the growing anger of the citizens pointing at the Government for intentionally ignoring the intel warnings given by India about the attacks. It was probably well planned to place blame at Sinhala Buddhists as the media was quick to write the story completely ignoring that it was Churches that were attacked and not Buddhist temples which was a give away as to what the real plan was all about. Unreported was that Sinhala shops were also attacked and destroyed as well as how Sinhalese kept Muslims in their homes when the attackers arrived in bus loads. All spelling government involvement.

So the media, the NGOs and the usual culprits issuing statements that pleased the western audience was quick to turn the entire narrative upside down and completely ignore covering the stories of the victims of 21/4 – the living injured some of whom included children who have had brain operations and paralyzed for life and instead the whole show was about a feigned anti-Muslim narrative. There was a lot of anger, for many the thought of Muslim homes, mosques and businesses having swords and other weapons was something they could not comprehend… obviously they transferred these thoughts on social media and Muslims did not remain silent either. There are many instances of Muslims asking each other not to buy from non-Muslim shops and so one party cannot be blamed.

https://www.facebook.com/hirunews/videos/1538591876278054/UzpfSTEyNzA0ODM2NTU6MTAyMTQ3NjAyNzE5NDE2NDk/?comment_id=10214775577404276&notif_id=1560457805777243&notif_t=comment_mentionjust look at this child who has had brain surgery and is paralyzed from one side. All these anti-this and anti-that allegations by EU cannot erase the pain that this child and his family are going through. Why is there no statements for them? So many other families are equally suffering.

We have one of the 3 accused claiming that Muslims should not be arrested during their fasting – how about killing people who were inside a church praying? Is that alright?

But we all know what goody-two-shoes EU-UK and US are good at – pointing fingers at others forgetting there are more fingers pointing back at them.

So what do these nosy parkers do – they go visit their man in Temple Trees and show ‘deep concern’ about the religious & political pressure directed at the Sri Lankan Muslim community – perhaps they should ponder as to how many Muslim countries they have all bombed since 2001, how many Muslim civilians they have killed but passed that off as ‘collateral damage’.

Who are the countries visiting our PM – France, Germany, Italy, Netherlands, Romania, Norway, Switzerland & of course the UK and they have proposed a ‘Religious Reconciliation Council’ whatever that means!

Let’s see the how UK and EU treats Muslims

Foundation for Political, Economic & Social Research says ‘Muslims are seen as the enemy within Europe’.

France was the first EU country to ban burka & niqab wearing in 2011. France has shut down 20 mosques and prayer halls for preaching radical ideology since 2016. After Paris bombs pigs head were thrown at mosques.

Belgium has banned halal animal slaughter. Belgium is the 2nd country after France to ban burka in public in 2011.

In Denmark TV2 survey revealed that a third of respondents believed Denmark was at war with Islam – 5 Muslim hate speakers were banned and 6 radical Islamic preachers were banned from entering Denmark. Halal animal slaughter was banned in Denmark in 2014.

Germany – 91 mosques were attacked in 2016. Chancellor Merkel declared in 2016 that face veils should be prohibited. Two-thirds of Germans say ‘Islam has no place in German culture’

Italy – In Lombardy burka ban was approved in local government buildings and hospitals.

Switzerland – burka is banned in Ticino and a 2008 referendum decided to ban minarets on mosques.

And then we come to UK – 1700 mosques exist in UK and half of this were attacked since 9/11. 57% of British public support burka ban in UK (YouGov poll) in 2016. After the Manchester attack a mosque was torched in Oldham.

Since the death of Lee Rigby there have been 100 hate attacks on mosques. 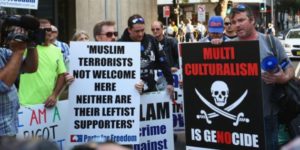 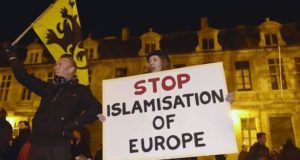 MEMBERS OF THE BELGIAN BRANCH OF GERMANY’S ANTI-ISLAM GROUP, PEGIDA (PATRIOTIC EUROPEANS AGAINST THE ISLAMISATION OF THE WEST), TAKE PART IN A DEMONSTRATION IN ANTWERP, MARCH 2, 2015. GERMANY HAS EXPERIENCED AN UPSURGE OF ANTI-ISLAM SENTIMENT IN THE FORM OF WEEKLY PEGIDA PROTESTS IN DRESDEN. 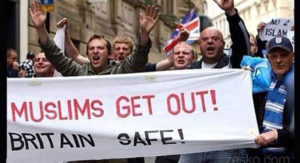 What is the righteousness EU is pretending to boast about.

US/EU/NATO lied and is out to destroy and divide Syria.

Just look at what these human rights angels have done to Yemen.

If these EU ambassadors want to help Muslims – please stop bombing the Muslim countries, dropping chemicals that are causing birth defects and millions and millions of refugees and displaced people while nicely taking over their natural resources and pretending to give these people democracy and human rights and freedoms.

None of what these EU nations have done to Muslims have happened to Muslims in Sri Lanka. It is totally wrong to put aside the real victims who are those that were killed on 21/4 the one’s who are injured and the families who are mourning the dead that must get world attention first. They were going to Church on Easter Sunday while others were going to enjoy a hearty Easter Sunday breakfast in the hotels. But their lives were cut short by a group of extremists who wanted to end life of people and we still do not know why, who tasked them to kill and what was the bigger motive in the attack and who were directly & indirectly complicit in the attacks and who by their inactions were also complicit.

These answers matter more than sitting with the PM and issuing dumb statements with this empty words when EU nations are themselves not treating Muslims properly but allowing Muslim extremisms to prevail and now the chickens have come home to roost in EU itself.