Divide & Rule was a key component of colonial rule. Illegally taking over lands and territories, planting fictitious history, infesting minds with hate and violence is part of a legacy that continues unabated. Sadly, historians have failed to take these false claims and nullify them. They have been silenced by “political correctness”. However, it is time people begain asking the questions and demanding answers. How can 2 provinces that were created only by British in 1833 be claimed ‘original habitats” of Tamil people? How can Indian Malabars claim a separate homeland in Sri Lanka? How can a South Indian customary law applicable only to those inhabitants be the customary law in Sri Lanka? How did the Colonial Missionary created Dravida Nadu movement become a Tamil Eelam movement & what is their ultimate plan? Lets have you start asking yourselves these questions too!

Question 1: How can Tamil Eelam Homeland lobbyists claim 2 provinces as their “homeland” making use of the 2 provinces created in 1833 by colonial Britain?

It is very clear that while the first Kingdom of Anuradhapura, 2nd kingdom of Polonnaurwa also included North Sri Lanka, the last kingdom of Kandy too included part of North & explains why the Kandyan king despatched his army to defend his people from the Portuguese. The last battle for the defense of Jaffna before it fell to European powers was fought not by a Tamil army but by Sinhalese men sent by the King of Kandy.

Portuguese historian Father Queroyz says “as long as Rajapure (Anuradhapura) was the capital of Ceylon, the whole island was subject to one kng” If it was so with Anuradhapura, it was so with the rest of the capitals. When the Portuguese arrived in 1505 there were 15 ‘kinglets’ subject to the King of Kotte of which Jaffnapatao kinglet was one of the 15 “kinglets” were independent or separate from the rest.

To quell the lies let us first turn to the maps. 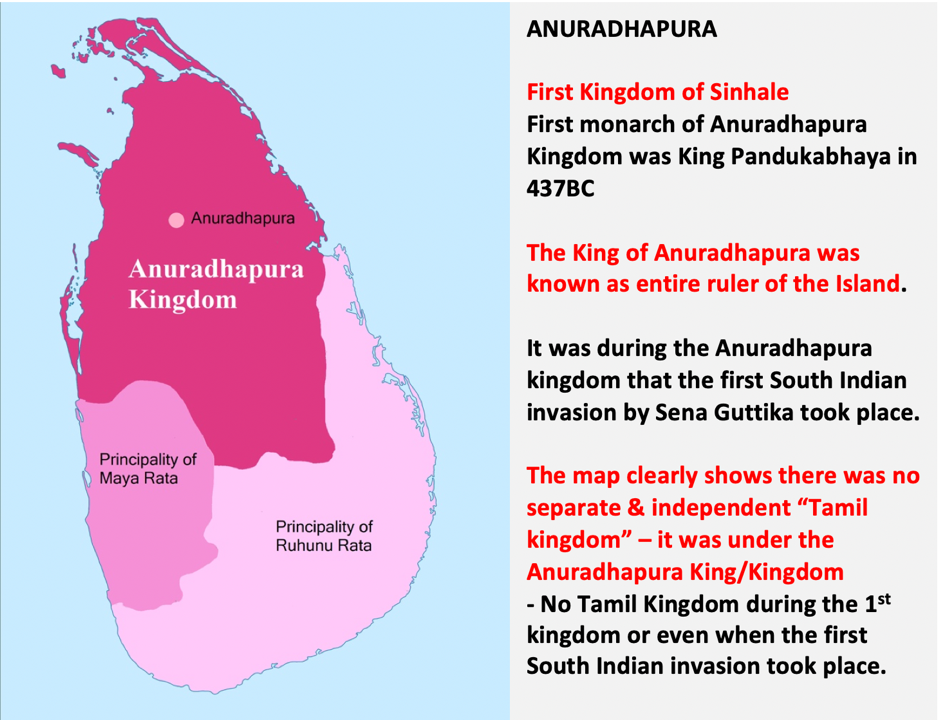 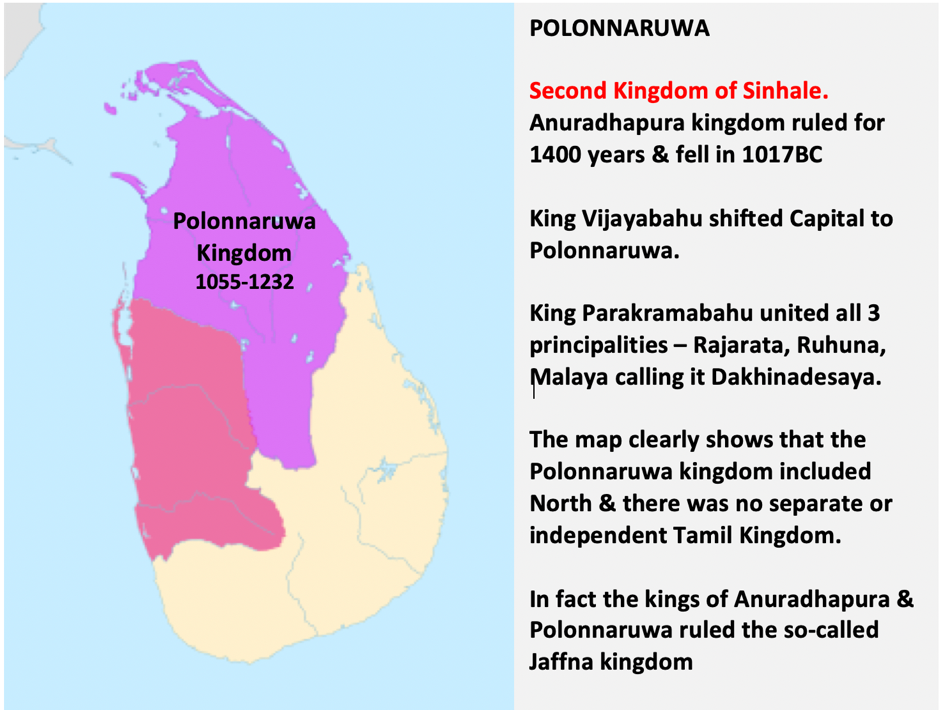 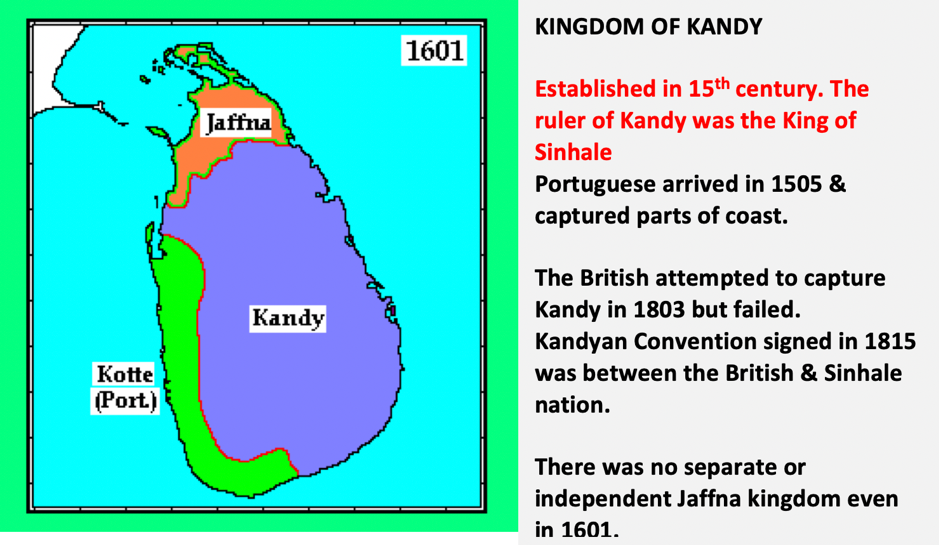 The 1st kingdom was in Anuradhapura.

The 2nd kingdom was in Polonnaruwa

The last kingdom was in Kandy

The kings of these kingdoms were the sole ruler of the entire Island.

These 3 maps clearly show there was no separate or independent Tamil Kingdom and the so-called ‘separate’ area being claimed as a “Tamil homeland” was ruled by the Sinhalese kings.

A separate kingdom must provide evidence of food/water supply (agriculture), a system of government, cultrure, belief & traditions, a written language, structures/monuments – the Kingdoms of Anuradhapura & Polonnaruwa leave us to cherish the worlds first man-made irrigation & water tanks, even animal hospital – these exist even to this day, where are those of a so-called Eelam Kingdom?

There were no separate independent kingdoms in Jaffna or anywhere else

There were no provinces.

Provinces were created by the Colonial British in 1833

Thus, there was nothing called Northern or Eastern province until 5 provinces was created in 1833 by Colonial Britain.

Therefore, how can the Eelam lobby claim to have ruled 2 provinces that did not exist until the colonial British demarcated them in 1833?

This is a key argument to debunk the demarcation of a bogus Tamil Eelam Homeland. 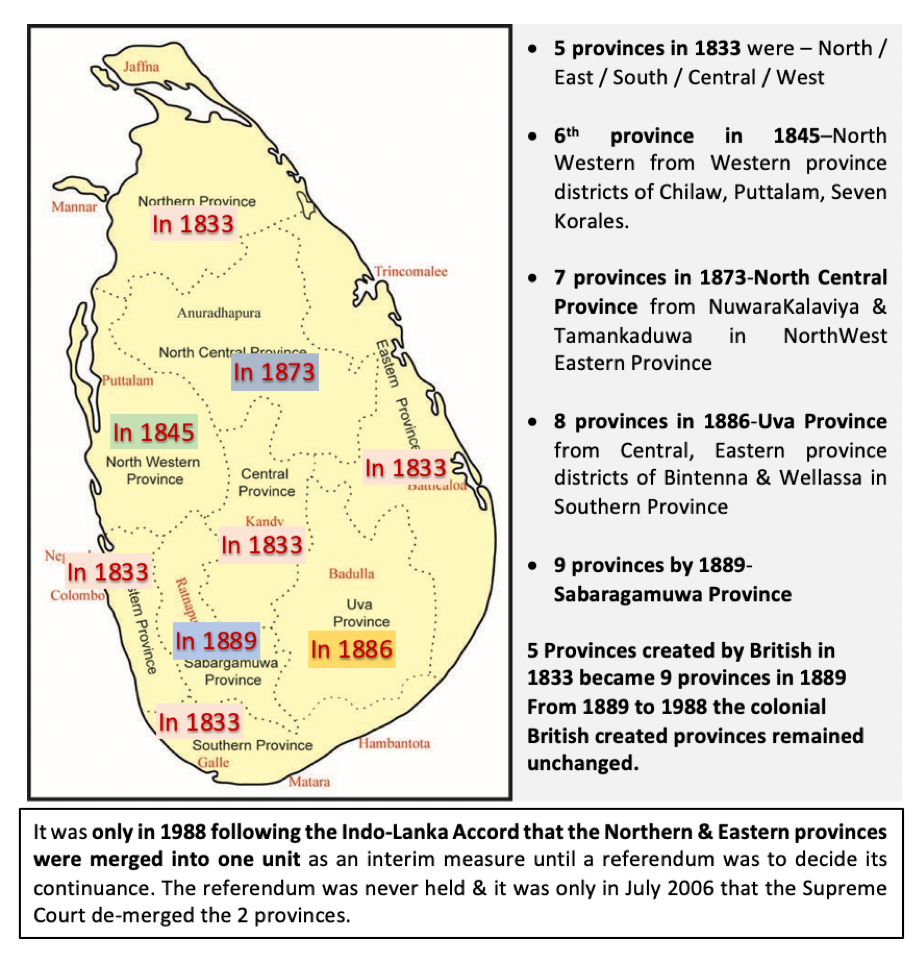 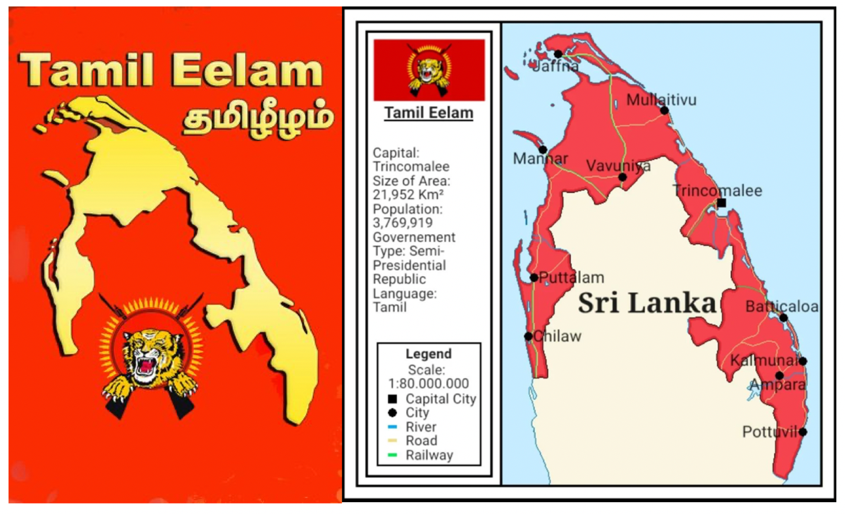 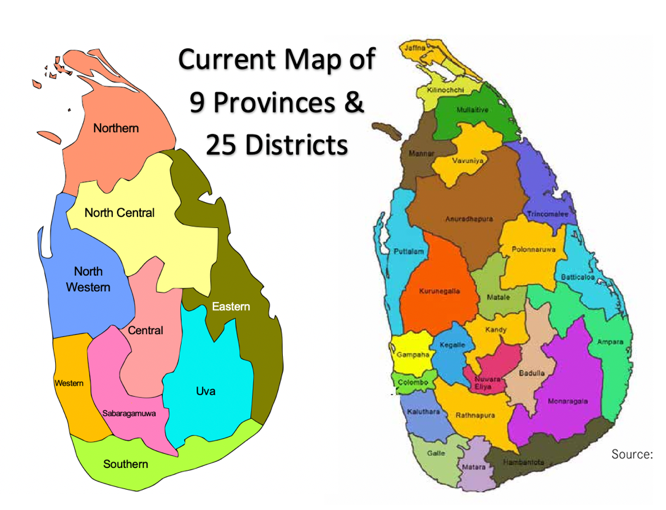 Question 2: How can Indian Malabars rechristened as Ceylon Tamils in 1911 claim a separate homeland in Sri Lanka?

There is no record in ancient Sinhalese chronicals, Tamil chronicals or even records of Portuguese, Dutch or British to claim an ethnic group called “Ceylon Tamils” were living before they landed. All of the colonial records refer to both Tamils & Muslims as “Malabars”. Malabars was the term given to people who came from the Malabar coast of South India or Coromandel coast also in South India. Malabars were indigenous to South India. Therefore, anyone termed Malabar were descendants from South India. Thus, the Tamils living in Sri Lanka were referred as Malabars by the Portuguese, the Dutch & the British.

The term “Ceylon Tamils” was coined only in 1911 when Sir Ponnambalam Ramanathan who was registrar of census, inserted Ceylon Tamils instead of Malabars. The term Ceylon was coined by the British only after the Kandyan Convention in 1815.

Malabars cannot claim any “homeland” in Sri Lanka as they were immigrants from the Southern coast of India. Their homeland is in South India.

The quest for self-determination in India for Tamils started in India.

We have established Malabars are not indigenous to Sri Lanka but to South India.

The Vellalas are a low caste in South India but became the upper elite caste/class in Sri Lanka, not stopping there, the Vellala’s went on to oppress their own, dictating how other castes should function at kovil, funerals, weddings etc. If Tamils are marginalized or discriminated it is by the Vellala Tamils and not the Sinhalese. The Thesawalamai law encoded by the Dutch in 1706 claiming to be Tamil customary law is actually not applicable to all Tamils but to only Malabar inhabitants from Jaffna. What is the % of Tamils covered by this definition and how many Tamils does this law exclude – if so why should this be referred as a customary law for ALL Tamils when it is not so, more importantly, the Thesawalamai law is applicable to Malabar inhabitatnts in Jaffna only. Malabars are from South India. Vellala’s are a caste originating from South India. How can anyone quote these to claim homeland theories.

It is good for Tamils to realize who is discriminating them instead of falling prey to propaganda. How far has the caste system marginalized Tamils against each other, is a question Tamils themselves need to honestly answer. When Tamils are not welcome into Tamil homes, when even cutlery & crockery are differentiated, when even kovils disallow their own, when people are reluctant to share a toilet with their own – is this not discrimination?

There was no term called Dravidian until it was coined by the Church.

The Church missionaries after creating the term Dravida went to great lengths to promote a fictitious history.

The Dravidian theory was an artificial theory implanted by the Church & it is possible the same was done to create a Tamil Eelam notion to separate both Tamil Nadu & Sri Lanka along ethno-linguistic lines.

If the Dravidian movement was led & controlled by the Global Church, is it a surprise that the Tamil Eelam lobby has the blessings of the Church apparatus as well? It is the Tamil Christians/Catholics who are mainly operating this quest.

1939 commenced the “Dravida Nadu for Dravidians” a quest for a separate sovereign & federal state.

Dravida Nadu was replaced with “Tamil Nadu for Tamils” then “We Tamil Movement” which led to demand for an independent Tamil Nadu which Government of India stopped by legislative enactments in 1963.

The demands for Dravida Nadu were identical to demands by LTTE during Thimpu talks in 1985.

If Dravida Nadu movement & map was created by the Global Church was the map of Tamil Eelam also their creation?

This implies that both movements (South India & Sri Lanka) did not originate from the people but from one external source – the Church.

Question 5: If the “eelam” area was borrowed from colonial British map, if Global Church planted the Dravida Nadu movement & Greater Tamil Eelam initiative, if Malabars, Vellalars, Thesawalamail all are imported from South India is it so difficult to realize that Tamil Militancy was also exported from India to Sri Lanka to pass on India’s headache to us?

The Jain-Commission interim report following LTTE’s assassination of Rajiv Gandhi, memoirs by the IPKF former commanders and even former Indian High Commission to Sri Lanka J N Dixit prove a RAW hand in Tamil militancy in Sri Lanka from training, to supplying of weapons to even logistics support & funding.

These lies are what lays the foundation for a bogus homeland quest which is kept alive because of the benefits to key players promoting it. The geopolitical & conversion motives are clear. Unfortunately so-called academics and historians have been party to the lies or felt shy to negate these with historical facts & arguments.

So lets bring these to the open & demand facts not propaganda.