A book on the Tamil demands by a nationalist Tamil author

My determination is to stand by the truth and justice, irrespective of race, religion and caste, but fight for justice. SriLanka is an island occupied by the Sinhala race from 5 BC. This book unravels the truths concealed by the Tamil scholars over the years to mislead the Tamils in SriLanka with the help of the Tamils in Tamil Nadu.

Most humans on this planet face challenges, intimidation, oppressions, and discrimination in some form or another. However, different races assimilate to mould as an ethnic community, as in a melting pot. I started to write this book based on my experience within the Sinhalese and Tamil ethnic group. Although I was born into a Tamil Hindu family, in Manipay, Jaffna, I lived among the Sinhalese community for most of my life. My early life hood as a boy and a secondary school student was in Jaffna, for a few years, where I observed various forms of multi-dimensional oppressive atmosphere among the Tamil community. This was based on caste differences and financial disparities. 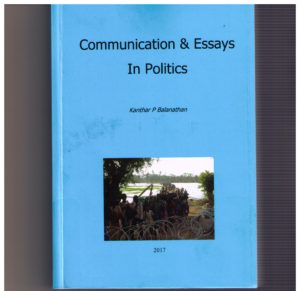 Since independence, the Tamils started to create political problems to the government of SriLanka. (GOSL). Sometimes it engenders intellectuals and analysts to think that the driver could be the west, so as to create political instability in the country, to achieve their objective, over a horizon of 50 years. SJV Chelvanayagam starting the Federal Party in 1949, had no pertinent reason other than he was not considered for a portfolio. When over one million Indian peasants were colonised in the tea plantation, the Sinhalese people did not protest. Later in the chapter, the suicidal steps taken by the Tamil politicians and Tamils are discussed.

My initiative during the period in Melbourne was to write letters and articles unravelling the truth and make foreign diplomats and leaders aware of the truth. Although they did not reply to my letters, it was obvious that the contents and the true situation in SL were digested and understood by the recipients. Also met politicians, and diplomats with my friends to enlighten the diplomats and politicians of the true situation in SL. I also paid a visit to SL to see firsthand of the development work in the North, which was tremendous, during the Rajapaksas period. The development work was rapid and people were happy and every family had a vehicle to move around.

This book is a compilation of all those articles and letters for people to read and become aware of the true culprits, who are waging war with their own people in SL, without knowing the real reasons why the west is giving them a hand in the pretext of HR violation etc. Most of the articles and letters unravel the hidden history of the Tamils in Jaffna, and outlines the suicidal steps they had taken to destroy peace and harmony in SriLanka. Not all Tamil citizens of SriLanka were supportive for their suicidal steps taken over the last 68 years. Where necessary, quotations and references have been given to substantiate the statement.

I have also covered the level of caste discrimination, oppression and how low caste people were treated by the Jaffna man.

**Tamils who were kept as human shield in Mullivaykal, war free zone by the LTTE, fleeing the hostage held area to the safe heaven, the army zone in Kilinochi.